Responsibility. I don’t like it. I am trying to do all I can to avoid it. Some crazy people purposefully fill their lives with more and more responsibility.

They get married. They take out loans. They grease up their baby cannons and shoot out babies at 18 month intervals. They claw their way up the property ladder. And at work they sell their souls to the highest bidder, all in the hope of finally reaching the holy land and securing a place on The Board.

Not the dart board either. The Board of Directors.

If I was ever put on The Board of Directors I would constantly be glancing around the room, thinking “look at all these grown ups!” I wonder if they know I’m only 9 years old.

Procuring all this responsibility voluntarily seems utterly ludicrous to me. Responsibility is a like a chastity belt. It’s pointless and cruel. It stops us from being carefree and having fun.

I had to be responsible once. I had to make a grown up decision regarding a job. I did not want to make this decision. I was scared. If I accepted the job I’d face the daunting prospect of my new employer finding out I was just a 9 year old child in the body of a 28 year old. 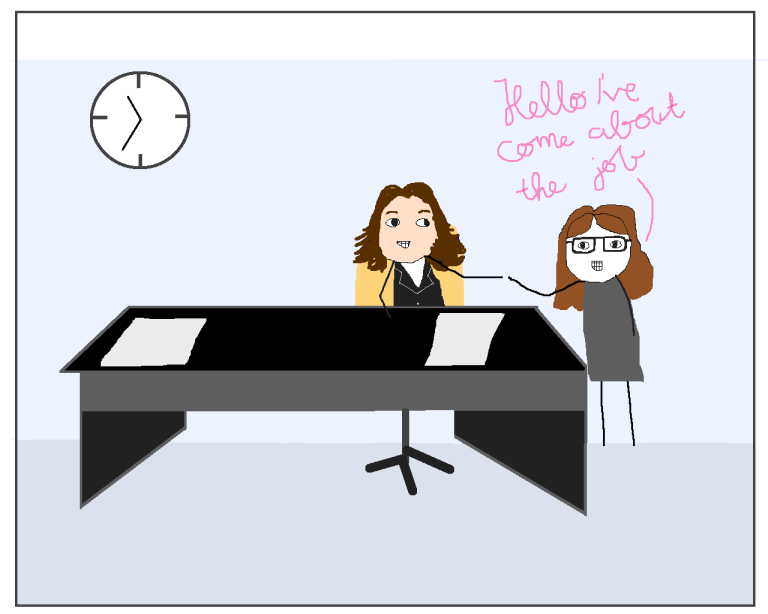 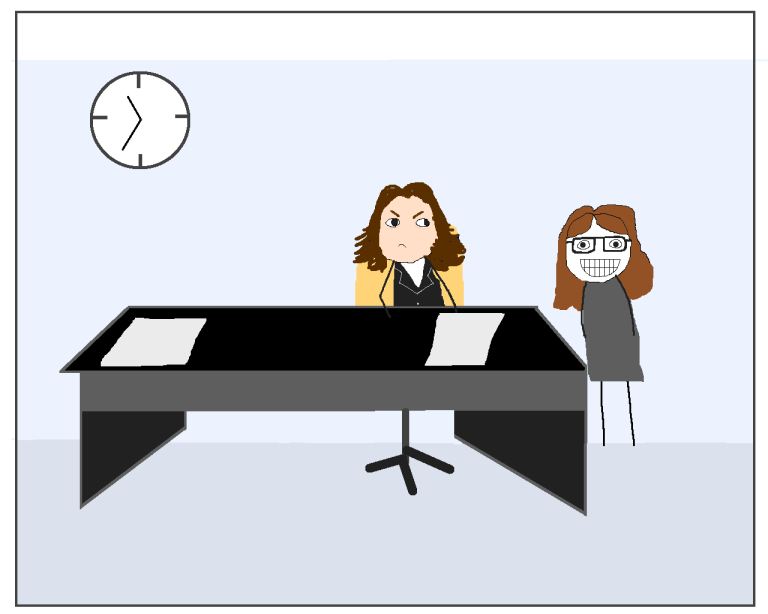 And if I declined the job, I would be labelled as unambitious and indecisive.

The more I tried to ignore the decision, the more overwhelming it became. I tried handing over the baton of responsibility to my friends saying things like “whatever you decide, I’ll do it!” But as most of my friends are grown adults, they all refused and told me I had to decide this myself.

In the end I chose to follow my gut which told me to eat some cake and hide under the covers.

I’m sure the employer got the message when I didn’t show up for the last interview. And if they didn’t and they’re reading this, I’m very sorry. I know I look like an adult but I’m actually just a child on stilts. Please accept this drawing as a token of my apology. 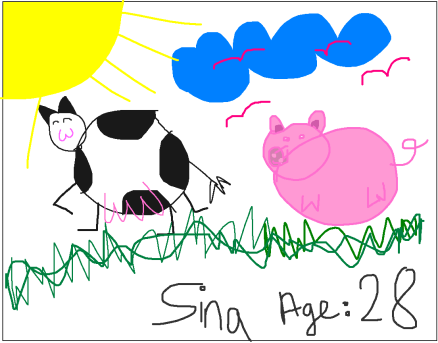 Responsibility is like a game of dodgeball with the dodgeball covered in shit. Under no circumstances do I want the shit covered responsibility ball anywhere near me. No thank you. People are trying to chuck more and more responsibility at me and I’m trying to block that shit like I’m Ben Stiller.

My father, for example, is obsessed with the idea of me getting married and growing an 18 year prison sentence in my womb. No matter how many times I tell him I’m not ready for that jazz, he still bangs on about it every time we talk.

Dad: You know I really want you to be happy and start a family. Maybe you could get married and have a nice big party. I like parties

I’m not ready to start a family yet Dad

Yes but don’t you want to have a nice family and a nice big party?

Dad I’m never getting married. Ever. If you put a gun to my head and said “Get married now” I would say “No, shoot me”

Me: I’m never getting married

Then how are you going to have children?

You don’t need to be married to have children

Dad: I think it would be sssoooooo nice to have a nice big party and when you’re ready you can start a family of your own. I would make it worth your while of course…help you out financially, maybe get you a big house, nice car, buy you some car seats you knooooooowwwwww

Nooooooo you’ll need the extra money for the baby

When I was about 24 I was at this dinner. There was a husband and a wife there. Both of them were adults. The entire evening was spent discussing taxes, insurance costs and rising oil prices. Towards the end of the evening, the wife let drop this exciting whopper of a story.

She told us that every year, she rings up different insurance companies, getting quotes from each of them. This sometimes takes her up to four hours. When she’s done, she calls her original insurance company, telling them she’s found a cheaper deal and would they be willing to match it. If they’re not, she ditches them with the following words:

Apparently, she saves herself £300 a year doing this.

Not only was I repulsed by the fucking mundanity of this anecdote, I was also struck by how out of control I suddenly felt about my own life.

I wanted to jump on the table, pull my shirt up, stick my tongue out and scream OOGGA AHHGGAA OOOGGAA GAGGAAHHAHHAAHA like a wild animal.

I felt so lost. Like I was being pushed down a road that ended with fucking tax brackets, factory shops and budget spreadsheets. I wanted to get the fuck out of there as soon as I could.

I want to go VROOOOOMMMM VROOOOOOMMMM whilst I’m driving. I want to put bogies in my belly button. I want to fart in the bath and pretend I’m in a jacuzzi. I want to stick acorns in my nose. I want to eat 100 sticks of Juicy Fruit chewing gum in one go.

*Side note – I just had my first piece of Juicy Fruit in twenty years. I’m very disappointed that in the twenty years since my mouth was last graced with the presence of a Juicy Fruit, they still haven’t managed to make the flavour last longer than 30 seconds. What the hell have they been doing all this time?

I don’t want to be an adult. Adults aren’t free.

“Well at the moment I’m just talking to an idiot”

What do you mean what do I do? I do a lot of things. I probably did like 50 things today. They want to know what I do for a’living. Well for a’living I mainly do a’breathing otherwise I’d be a’dying.

I don’t have time for this. Honestly. Stale small talk literally make me want to fake a hernia.

I often find myself trapped in boring conversations with adults. Especially when I’m in an elevator. One of my biggest fears is elevator small talk. Those conversations are of no nutritional value to anyone. 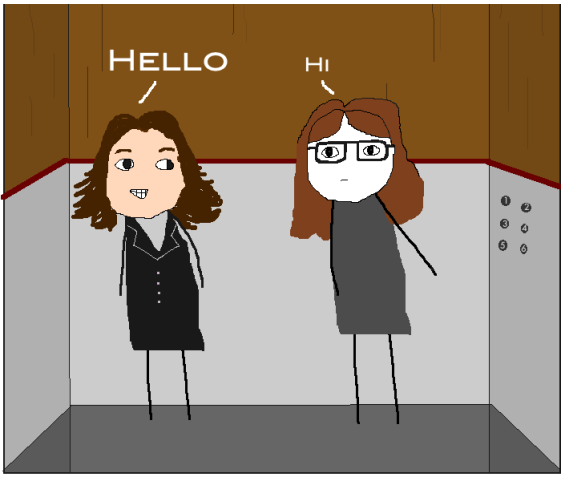 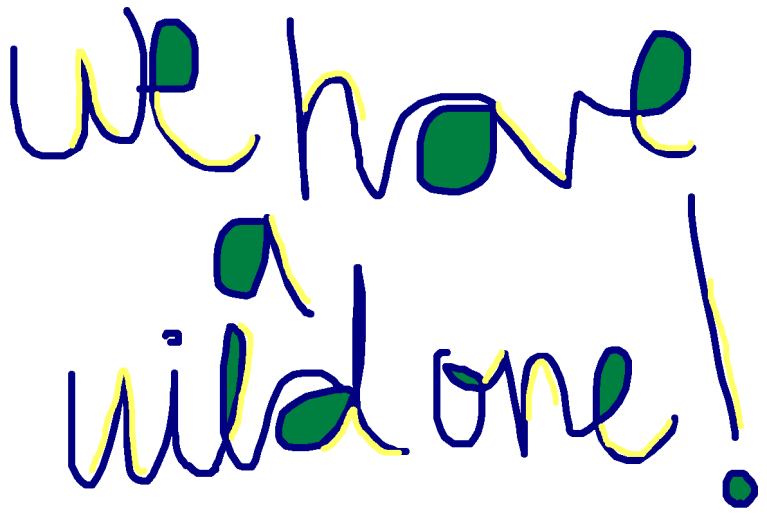 Adults are so predictable. On Fridays it’s all like:

“Oh what are your plans for the weekend?”

“I don’t have any plans. My plans involve being where you’re not”

And on Mondays they say “how was your weekend?” Then you gotta make up stories that will make you look both cool and grown up. Cos you can’t tell the truth. You can’t say “I watched three seasons of Desperate Housewives and ate about a kilo of gouda” You gotta romanticize that shit and say “I had dinner with some friends and went to the movies”

That is no way to live.

I used to think that by the time I was 25, I would finally feel like an adult and all that extra responsibility like squeezing out babies, having husbands and making elevator small talk would come easy.

But now I’m 28 and I’m no closer to feeling grown up. In fact, I feel younger than ever. Where does this leave us? Will I ever feel like an adult? Does anybody? Do you? And if you do, was there a significant moment in your life that signified your ascent into adulthood?

90 thoughts on “Responsibility. And why I don’t want to be an adult”

🤍
Lost at sea I am not. 🌊🤸🏼‍♀️❤️
Motherfuckers don’t you know I piss diamonds? 💎 ❤️#selfdoubt #mentalhealth
Today I shall settle the unsettled. Finish the unfinished. #businesstime 💪🏼
I’m on a beautiful and peaceful train in Germany on my way to Dresden. There is a woman with her son who is about 7 years old. He has a slight stutter and has a dummy in his mouth. A sweet boy. As they go to the bathroom the couple opposite me remark that he is very old to be using a dummy and how that’s probably why he has a stutter. This made me sad. That woman is doing her absolute best to raise her son and judgemental motherfuckers like that are not helping. That woman is raising the next generation and we should be thankful to her. It just made me think about humanity and people. I wanna be kind to people. I want to be patient and tolerant and loving. I want to be sympathetic and compassionate to others. Because being kind actually feels so much nicer. It’s so much easier to be kind. It’s so much better! My heart rejoices when I’m around kind people. So there. Tolerance. Love. Kindness #wordsofwisdom #wordstoliveby #motivationalquotes
“...Setting fire to our insides for fun, to distract our hearts from ever missing them. But I’m forever missing him” 💔 #daughter #depression #recovery #mentalhealth
%d bloggers like this: