In January I turned 30 years old. And one day later my sub-conscious decided that was old enough.

The day the world stood still.

On January 15th I tried to end my life.

No! Well, yes…but no…yes….It was an act of accidental randomness. I accidentally did it on purpose. There is no denying that. The truth is I don’t know why. And I cannot recall much of the prep work. I don’t remember taking the pills, or choosing which ones to take. I don’t remember popping each tablet. I don’t remember what they felt like dragging down my throat. I don’t know if they felt chalky or smooth. I only remember, saying I am going to bed. I remember it being a normal bedtime. So maybe 11 o’clock? I took all the medication and then must have drifted off to sleep. I took approximately 65 pills. I don’t know if I used water to wash them down or cold tea. I don’t remember. I recall googling Bon Iver For Emma Forever on my phone. The first time I heard Bon Iver I said as a joke that I wanted to die to this music (but I meant more like in an old peoples home surrounded by my children and grandchildren)

I was found the next morning, perhaps at 8 o’clock. I remember hearing someone say “an ambulance will take too long”

The next thing I remember is laying on a gurney and announcing to the nurse that I could definitely walk to the toilet. And the nurse being very firm in her opinion that I couldn’t. But this also didn’t happen because I didn’t speak until two days later. I remember seeing a piss bag on the floor (that did in fact happen. Those sneaky bastards stuck a catheter up my vajaja)  Didn’t even ask my permission those motherfuckers. For the next five days it felt like I was pissing glass.

The scary part is that I really don’t know why I did that. I made a mistake. I don’t know why. I can only say quite truthfully that I did not plan it. That it was out of character. I’m a perfectionist. And a writer. There is no way I would have departed this dear planet without a beautifully scripted goodbye letter. I would have made sure I was wearing matching pyjamas at least. I would have meticulously researched each tablet and worked out the side effects and optimal over dosage. So yeah, this was very out of character.

I want to throw up…its all acidic in my stomach. What on earth has happened? What? What? Did I fall down a rabbit hole? Is this the ministry of magic? What the hell happened?? 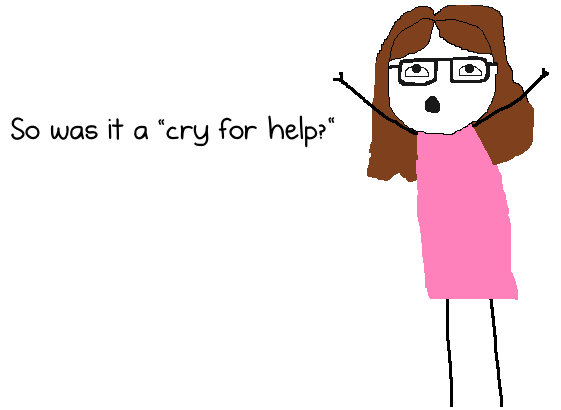 What the fuck does that even mean. Help from who? I’m old enough to know that I’m in this alone and only I can fix my shit. So it was not a cry for help. I absolutely despise attention and sympathy so I can’t say I did it for those reasons either.

All I know is that the last few months were very hard. And I was very tired. I didn’t know what the future held. I didn’t know the road anymore. I didn’t know which way to go. I was lost. I just felt so lost. So scared. So scared of everything. I wasn’t even depressed. I was totally normal. I had a completely wonderful 30th birthday party the day before. I was happy. Surrounded by friends, drinking champagne and jumping in the pool for a midnight skinny dip. 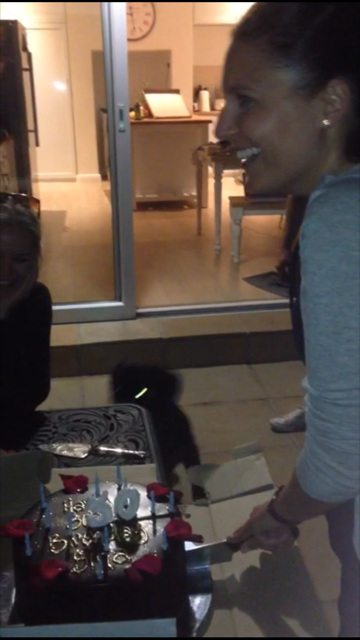 Day after My Birthday 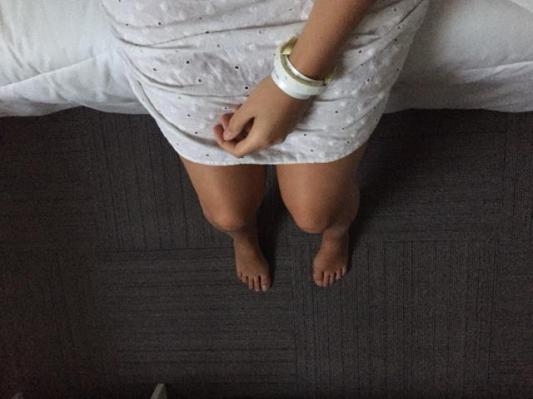 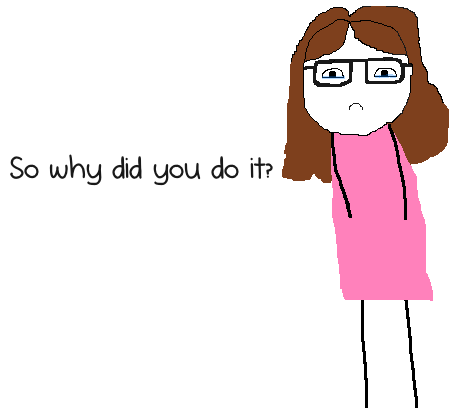 I have no idea. I don’t know why. And I don’t know why I made it. Well I know why, because they pumped me full of IV drips and flushed everything out of my body. By the way, interesting little fact for you, they don’t pump stomachs anymore. Only time you would get remotely close to a pumping scenario is if you had literally taken the overdose like 20 mins previously. In which case they would force-feed you black, chalky charcoal water until you gagged and threw up your lungs. Ah the joys of near death!

No! So, what happened is that…life happens, things happen and sometimes they are so awful and painful and tragic that my brain thinks…hey I know how best to deal with this…let’s just pretend this isn’t happening and just keep saying over and over and over that we’re fine, we’re fine. That’s what I did. 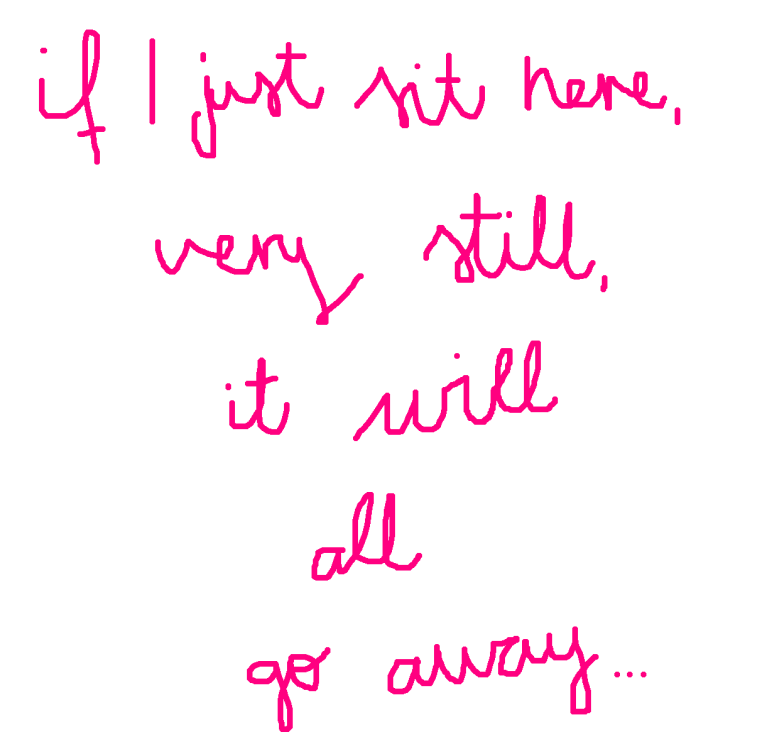 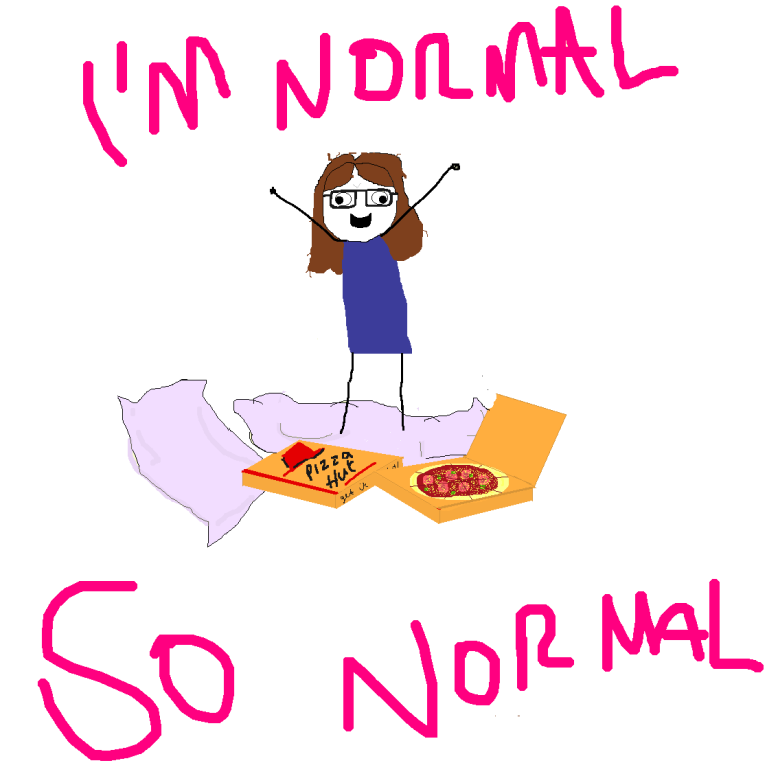 I guess the weeks leading up to it I wasn’t entirely normal. I don’t know what I was. I guess maybe I was in shock. I have no idea. Normally I’m quite in tune with my emotions but I couldn’t access any at that point. I just stood. I stood there and didn’t move. The smallest of breeze could have knocked me off my feet. I felt nothing.

Now? Now I don’t know what to do. I quite frankly don’t know how to adjust to life. Everything seems trivial and pointless. It feels like I’ve met everyone there is to meet in the world. I’ve eaten every food ever made, heard every song, seen every movie…It feels like life is now finished. I know how that sounds. I know how it looks. I look spoilt. Ungrateful and selfish. Trust me, I feel it. I feel the shame. But it’s the truth…and that’s all I have to offer.

I don’t know how to sugar coat this stuff. I didn’t want to die then…but I’ve played with the thought and acclimatized to it…and I’m in treatment and I’m on medication and I’m aware and alert of being in this state of mind. I am aware. It doesn’t make it any less of a struggle. I think about it all the time. And I fight against it. I say, not today…maybe tomorrow and I keep doing that…just get to Sunday…just get to Sunday…and on Sunday I say…just get to Monday…baby steps, you know?

I look at people out in the world…they’re doing jobs and living and buying food in the supermarket and I’m like how the fuck are they doing that! I’m in awe! I’m like you jammy motherfuckers! How’d you learn how to do that!

It’s like I’m a toddler and they’ve just given me the keys to this massive tank and they’re like Ok drive this…I wanna be like erm excuse me but I’m only 9 months old and… like…I have no motor skills.

“No time for mummy now! Get hustling!”

And all around me I’m surrounded by fucking tank-driving babies and they’re all really good at it. They’re all like: “Wooohooo another promotion…wooohooo we bought a house!”

I’m like…”How are you doing this? How did you learn how to do that?”

Where are all the other struggling babies? I can’t be the only one…why is it that when life gets hard I crumble like this. I literally deflate…I turn into mush…I can’t open my eyes…I physically can’t move…I sleep for days…I don’t eat…I barely exist. My body takes on the consistency of bird shit. It’s all watery and slimy and acidic…and I have to scrape myself off the floor. My whole being rejects being alive. My arms look weird…they’re attached to me but they’re not a part of me. I pick and cut them to see if they’re definitely mine…and they bleed so I guess they are. I become another being. My voice isn’t my own. I look down at my arms and think “I never wanted you!” I never wanted any of this!

I wanted to be a squirrel. I wanted to live in the woods. And the real trauma…the real misery of life is that I’m not. I’m me. I’m me. I’m human and I didn’t choose any of this. And I’m ungrateful and people have real hard lives and I’m so fucking lucky to be alive. So there. That’s it. Onwards and upwards from here.

7 thoughts on “What happened?”